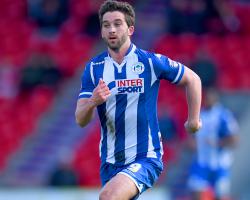 The match was given the green light following a 5pm pitch inspection, and Wigan are now set for a January trip to Premier League club Bournemouth

Fylde, though, were level five minutes before half-time through Simon Grand and went ahead after 65 minutes when Danny Rowe converted a pass from Jon Smith

However, any hopes of a fairy tale finish were dashed when substitute Grigg levelled after 80 minutes, before netting what proved to be the winner with six minutes left

Posh, though, were soon level through Michael Doughty before Jack Marriott added a second just before half-time

Substitute Matt Young made it 2-2 after 68 minutes, but just 60 seconds later Marriott grabbed his second of the night at the other end.

Midfielder Marcus Maddison added a fourth with a penalty after 78 minutes, with Gwion Edwards netting Peterborough's fifth in stoppage time

With an improved forecast expected, Crewe's tie against Blackburn was put back by 24 hours

Exeter saw midfielder Jordan Tillson sent off in the 63rd minute for a second caution.

The Grecians, though, levelled things up through a penalty from Pierce Sweeney but n either team could conjure a winner during normal time

With just five minutes before a penalty shoot-out, Jayden Stockley headed Exeter into round three

There was also extra-time drama at Huish Park, where Yeovil saw off a spirited fightback by nine man Port Vale to win 3-2.

However, the visitors rallied and snatched an equaliser through Marcus Harness in the 83rd minute to force extra-time.

Khan put Yeovil 2-1 ahead on 95 minutes, only for Antony Kay to level things up after 108 minutes.

The Glovers, though, secured a home tie against Bradford in the third round when Francois Zoko swiftly netted what proved to be the winner